Fifteen and a half years ago, I got my first tattoo with my ex. It was a very simple design, a Japanese kanji for courage, based on a tattoo my ex had in the same location on his wrist. I don’t remember much from getting the tattoo except that it was relatively painless and quick and I began telling people that it was a reminder to myself that I had courage.

Fifteen years was a long time ago. I’ve grown since then, though I might still need that reminder, but I’ve had regrets for a long time. I didn’t like that I had tattooed myself in a language that I didn’t speak, in a style that was appropriated from a culture that I’m not a part of. I regretted the reminder of my abusive relationship on my body. I just couldn’t figure out how to turn the kanji into something else though, since it was black ink in a pattern that I couldn’t draw into something else.

I’ve had a great appreciation for dinosaurs for a long time. And I’ve identified with them strongly for the past years, especially with Tyrannosaurus Rex. What started as an inside joke about how I am really a tiny dino blossomed into my adopting this as part of my identity. No, I don’t think I am actually a dinosaur, but I enjoy playing the part sometimes. So when it came to trying to figure out what to cover this tattoo with, I decided that it would be great to put a dinosaur in it’s place. I couldn’t figure out how to design it myself though, so I reached out to a local tattoo artist to see what he could come up with.

I was a little nervous going into the shop yesterday for my appointment, because I hadn’t actually seen the sketches he’d drawn yet and had no idea what things might look like. I knew that I could walk away without getting the tattoo if I didn’t like what he had come up with, so I wasn’t worried about getting something I didn’t like, but I was really hopeful that he would design something I’d fall in love with. He did not disappoint.

The dinosaur snakes its way from the outside of my forearm, covering the old tattoo seamlessly, and branches out around the outside of my arm. My only complaint with this tattoo is that it’s impossible to get all of it in one photo. The shading work is brilliant. I can’t express how much I love this tattoo. It feels appropriate to have something that fits in line with my identity rather than a foreign symbol that made me cringe every time a stranger asked me about it. It feels like a reset in some ways.

I’ve been so engulfed in depression lately that laying on a table feeling that familiar stinging sensation as the tattoo artist transformed my arm was comforting. In the same sense that self injury has been comforting in the past, the pain felt like a release that I had long been needing, except this pain didn’t come with feelings of shame and regret as self injury often does. My partner who came with me kept commenting that I just looked blissed out for the most part, probably because I was high on endorphins. But it was good. I needed this.

I’m starting again in the LGBT partial hospitalization program that I went through over the summer tomorrow morning. I have a lot of feelings about getting help, mostly shame for needing help, for not being strong enough to get through this on my own. I know that this is my own internalized shit and that it’s actually a strength that I’m not giving up and fighting this, blah, blah, blah, but it sucks all the same. However, there is one brilliant thing* that does not suck that is easy for me to see and since it’s still really sensitive, it’s easy for me to feel. That is a thing that I can bring with me tomorrow when I go to my program, which will be with me the entire time. And I love it. I guess what I’m trying to say is that even though things really suck right now, this experience has been a light in the dark and I really needed that right now. 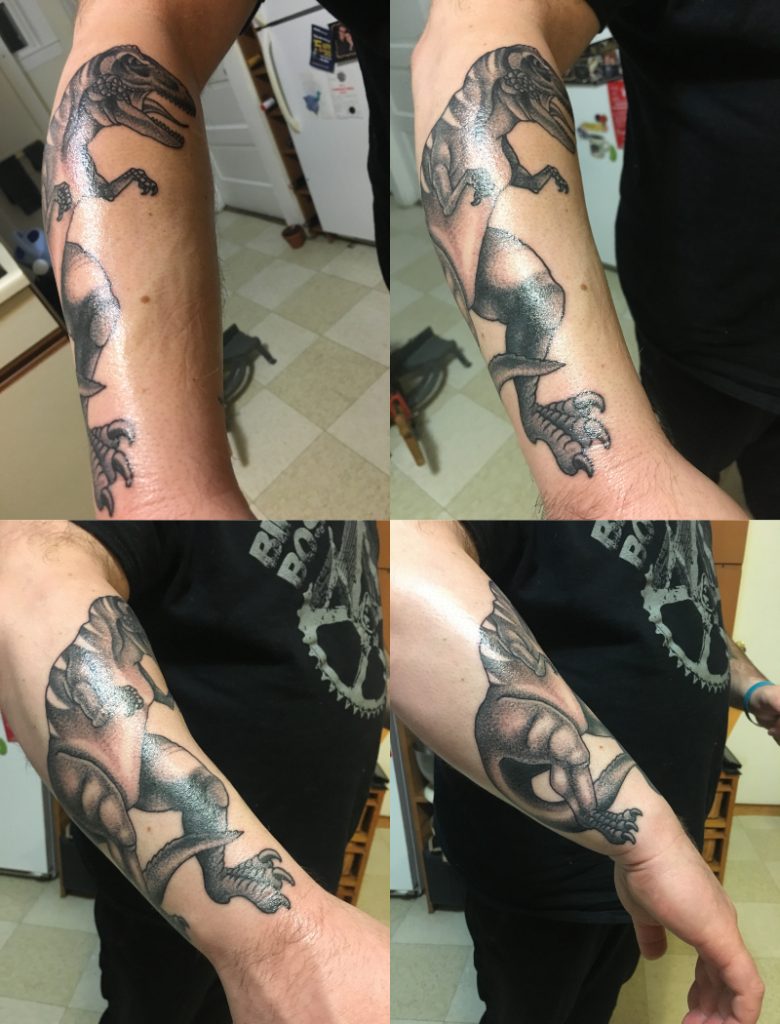 Image – Four photos stitched into one, showing four different angles of my right forearm with my new dinosaur tattoo

My friend and upstairs neighbor committed suicide a week ago and it feels a little like a bomb has exploded in the center of my community. Watching my friends struggle to process the news and dealing with complicated feelings all while trying to make sure that my friend’s partner is well supported has been… difficult. Amelia and I weren’t all that close of friends, especially in the last few months or so, but hir death echoed like a shockwave across the community. I feel responsible for us not having been closer friends and at the same time, I’m not sure what I could have done differently.

As a survivor of childhood sexual assault, it is a challenge for me to be around overt displays of sexual behavior. I have a feeling some of my friends consider me to be rather prudish about sex, but it’s just really complicated for me. Even when it is modeled in healthy ways, it feels unsafe or at the least deeply uncomfortable for me to be around people who are being really flirty and aggressively sexual. Amelia often made me feel triggered in this way. Watching hir relationships with people often left me feeling vulnerable in a way that made me feel unsafe. I had planned on trying to set some clear boundaries around the specific behaviors that made me feel unsafe, but I also didn’t want to cause hir more distress when ze was already so overcome by depression so this conversation was never able to happen.

Now I have regrets. I regret that this conversation was never able to happen because it makes things feel unsettled, unresolved. And now instead of mourning for the loss of a friend, it feels like I lost a friend who could have been a much closer friend if it weren’t for my hangups around sex and sexuality. I regret that I was unable to be a better support for hir when ze was still alive because I was afraid of being triggered. I regret keeping my distance as much as I did because I was trying to protect myself. And I feel deeply alone in all of this because it feels like everyone else’s relationships with Amelia were much simpler. I feel like I can’t say “I miss Amelia but our relationship was difficult at times and it’s complicated” without coming across as a giant asshole.

My therapist reassured me yesterday that I’m not a giant asshole, but somehow having someone who gets paid to listen to me tell me that doesn’t dissolve those feelings. Of course she says I’m not an asshole. It’s part of her job to help hold me together. I don’t know how to resolve my feelings around this. I feel deeply guilty and angry and oftentimes very alone. How do you get support from people who you’re afraid are going to judge you harshly, even as you feel you probably deserve it? Is it possible to have imposter syndrome when it comes to grief?

And if that weren’t enough to deal with, I’m also struggling with the guilt I have over the realization that a few years ago, I could be the cause of all of this grief in my loved ones. There was one day back in 2012 where I had a plan in place. I was ready to die and all I needed was for my partner to leave for work and leave me alone in the apartment. I had made up my mind and the only thing that kept me from dying that day was my partner seeing something in me and knowing that I needed help immediately. She didn’t go to work that day. Instead we went to the emergency room and I signed myself into a locked psychiatric unit for a month. But I can’t stop thinking about what would have happened if she hadn’t realized where I was. She would have come home from work and it would have been too late. But when you’re in that mindset, when you’re ready to die, the consequences of your actions don’t register. I know that for me, I wasn’t thinking in that moment of anything except ending my pain in the only way I knew how.

So how do I move from this guilt, this anger at myself, into a place of healing and moving on? I know it has just been a week, but this feels like the longest week I’ve ever had. I feel stuck in my grief and alone with my guilt. How do I let people in without inappropriately centering the conversation on myself? It all just feels like some horrible dream from which I can’t wake up. How do I be a better support to the people I care about so that this doesn’t have to repeat itself in the future? How do I be a better person to myself? If only I had all the answers. 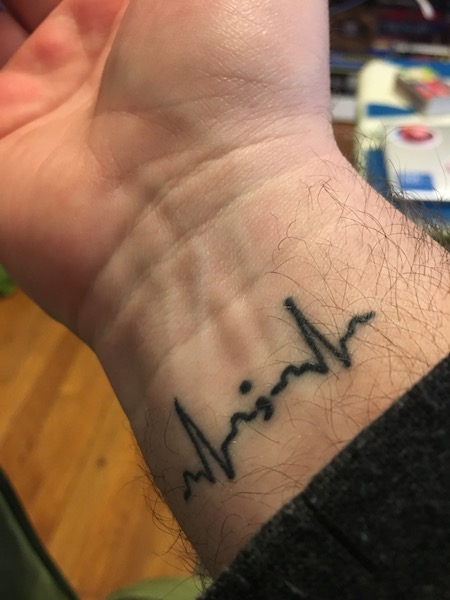 (Image description: A photo of my right wrist with a tattoo of a semi-colon nestled between a sinus EKG rhythm)